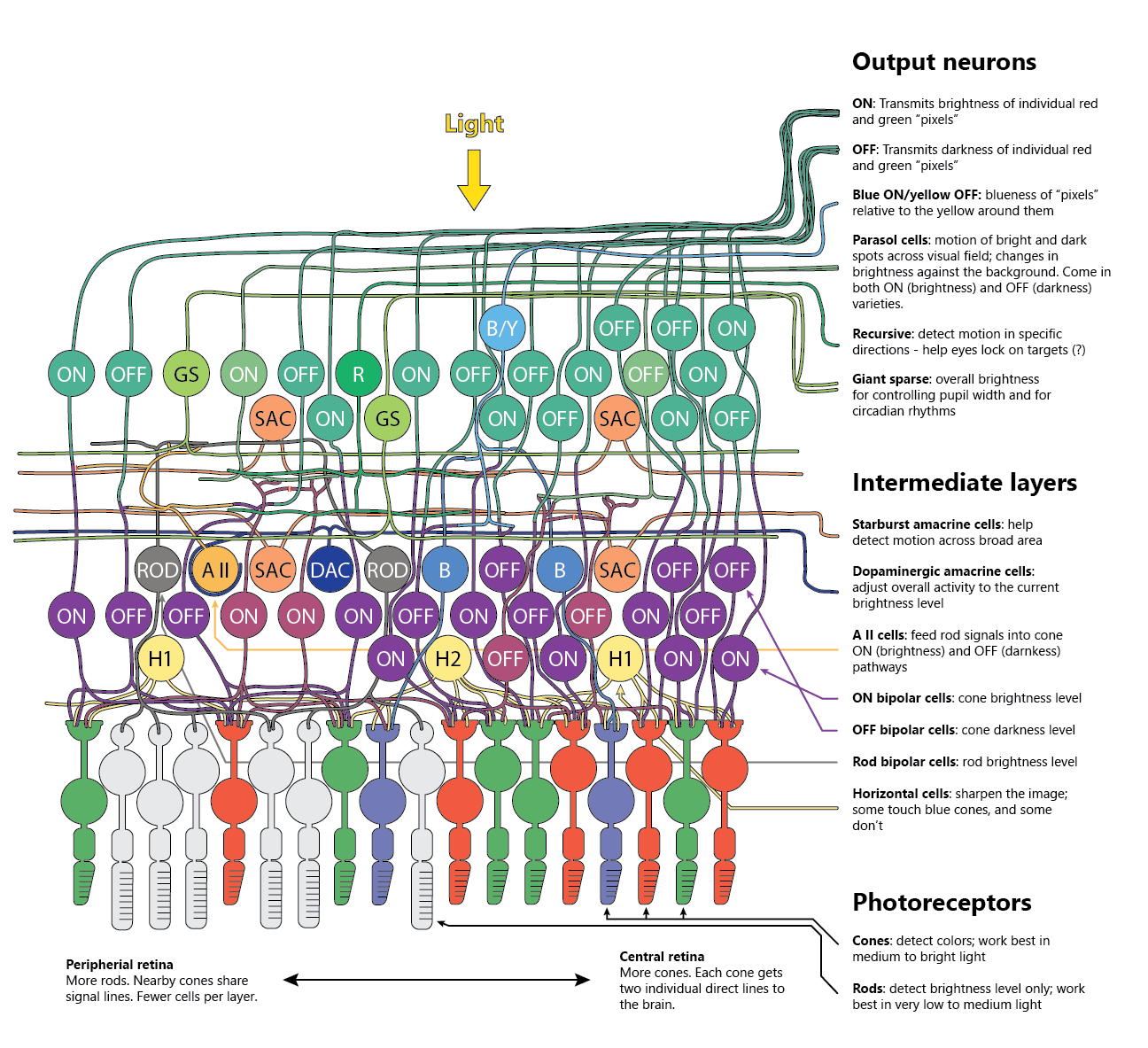 The picture above shows some (far from everything!) of what we know about the cells and neural circuits in the human retina.

What’s interesting is - the retina is not just a light detection organ. It’s a complex electro-chemical calculator with three neural layers, and it uses these layers to extract a number of useful signals from the light that hits our eyes.

Below, we’ll step through some of the more interesting features of the retina, but if you’d like to learn more, the above picture (and this article) are mostly based on this review article published in Feb 2020 in the journal Progress in Retinal and Eye Research, and on chapter 17 of the latest edition of Ryan’s Retina.

Photoreceptors are always on - except when there’s light 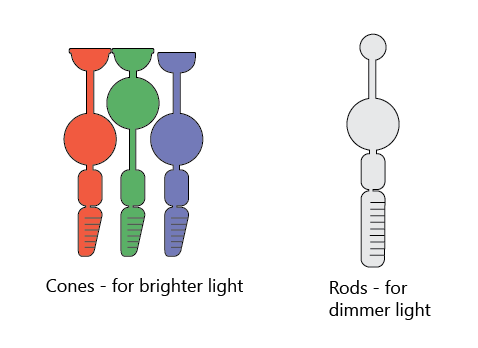 The photoreceptor cells in the vertebrate retina - rods and cones - are at the very back of the eye, behind the other layers of neurons.

Cones work best in bright light and can detect colors. In humans, there are three types of cone cells, each specializing in detecting red, green, and blue light. Rods work best in the dark, but can’t detect colors - just the brightness level.

Since the photoreceptors are at the very back of the retina, light has to navigate a tangled maze of neuronal bodies and wires to get to them. It does so using something called Müller cells (not shown), that stretch across the entire thickness of the retina and act like fiberoptic cables.

When the light gets to the photoreceptors, it turns them down. In complete darkness, the photoreceptors continuously emit neurotransmitters (“fire”, or “are excited”) at their maximum rate. The light inhibits them. 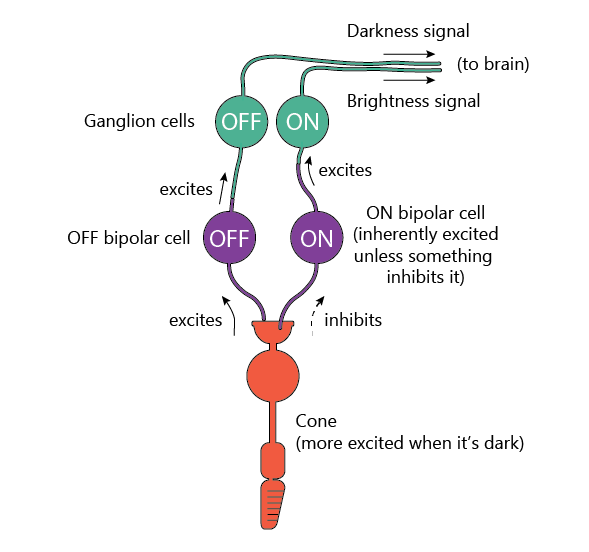 Why are there two channels instead of just one? Good question. Maybe so that it’s easier to recognize dark objects on light backgrounds more easily?

Either way, as far as we can tell, this ON/OFF channel pair only occurs with the red and green cones. Blue cones and rods have only ON bipolar cells. Though with rods, the story is a bit more complicated. 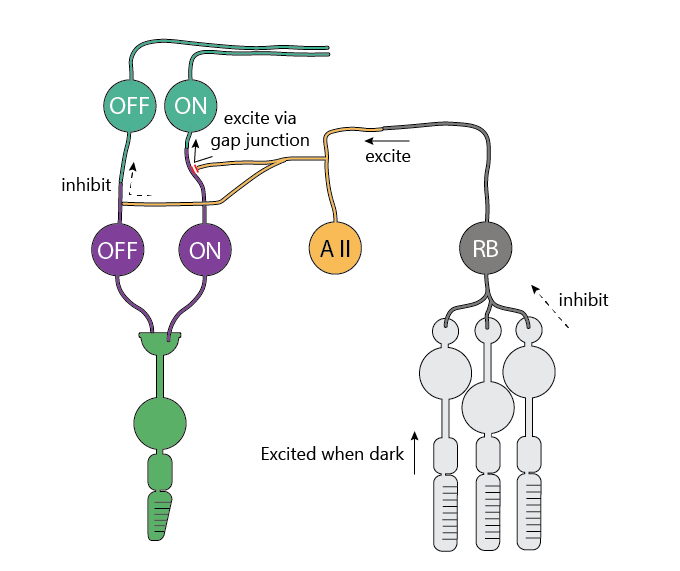 Humans (and other primates) have a fantastic vision. One of its crazy feats is that it can see across 10 log units of light intensity by using different light detectors and different retinal circuits in different lighting conditions.

Rods can detect single photons (!) and become saturated when it gets brighter than dusk/dawn. Rod signals are further amplified by neurons that collect multiple rod signals, suppress the noise, and feed the signals into the cone signal pathways.

This is done with help of the so-called AII amacrine cells (that’s roman numeral “2”, so it’s really “A2”, but the literature calls it “AII” for historical reasons). These AII cells collect inputs from the rod bipolar cells (which come only in ON variety), and use that signal to inhibit the cone OFF bipolar cells, as well as directly feed voltage into the ON bipolar cells through the connections called “gap junctions”.

This way, even when it’s dark, the same parts of the brain can be used to process the incoming information even though it’s been collected by a different set of photoreceptors.

Motion gets detected starting in the retina

Some output neurons - Parasol cells (ON and OFF varieties) and Recursive cells - produce the biggest response when the stimulus moves across its visual field.

What kind of neuron circuits make that happen?

For parasol cells, this paper suggests that it’s a network of special diffuse bipolar cells that makes it happen.

When the signal moves left to right in the image below, the bipolar cells excite each other through gap junctions that let voltage jump from one cell to the next. 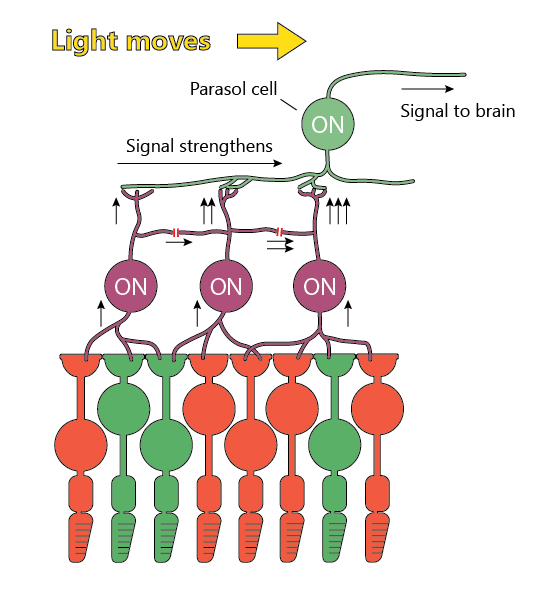 Due to the internal mechanisms of neurons, these signals add more than linearly and produce a big response in the last bipolar neuron - ultimately exciting the parasol cell a lot. 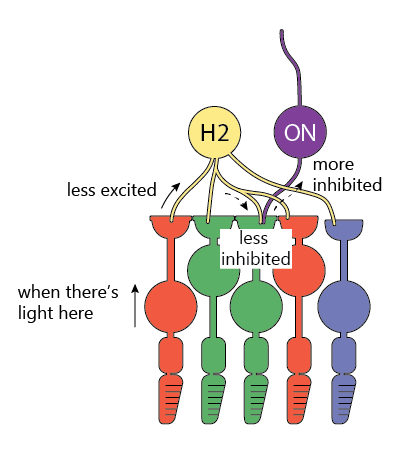 Retina also has a number of circuits for sharpening the image and enhancing the contrast.

One of them involves the so-called “horizontal cells” (yellow “H1” and “H2” cell in the image at the start of this post). These live in the same layer as the bipolar cells and connect to a lot of nearby cones.

The way the horizontal cells work is pretty clever: they are excited by the cones, and then, in turn, inhibit the cones back.

To see how these sharpen the image, let’s carefully look at what happens when the light shines only on one photoreceptor in the picture above.

If only one cone receives light, then

The result is that we see a bright dot surrounded by a darker ring, making the dot more prominent.

By the way, this type of center-surround contrast enhancement is a common feature across all sensory systems, including touch, hearing, and smell.

Like image sharpening in Photoshop, this process can leave artifacts. The most famous one is below - the Hermann grid. The dark spots at the intersections disappear when you look straight at them because the surround inhibition fields are larger at the periphery of vision than in the center.

Blue cones are lower-class citizens in the retina.

For various reasons, blue cones get treated differently by the retina. They sit a bit farther back from green and red cones, they don’t get OFF channels, and there aren’t output (ganglion) cells that produce a pure blue signal.

Instead, the ganglion cells responsible for blue color combine blue ON signal together with red+green (= yellow) OFF signal to produce a “relatively blue” signal.

Blue cones are also sparser and aren’t present in the very center of the retina. This is in part because the lens in the eye produces chromatic aberrations at shorter wavelengths, and tighter spacing between blue cones wouldn’t help us see better.

Retina also adapts to light through Dopaminergic Amacrine Cells (DAC - dark blue on the diagram above). They spread their tentacles throughout the retina and around the bodies of some neurons.

When the light becomes bright enough, they ramp up the dopamine production, which in turn lowers the volume in the retinal circuits through various mecanisms.