As I read more neuroscience, I run into more interesting neural circuits. One of these circuits is the Vestibulo-Ocular Reflex (VOR) that helps us keep the eyes locked on a target when the head moves.

What’s interesting about it are both its simple wiring (at first glance), and the extensive hidden support circuitry that can tell us more about how the brain works.

VOR is not the only circuit that helps us keep our eyes locked on target; there are others that work in parallel. I suspect that they probably use the same underlying principles.

(Note: some links here are behind a paywall. Remember that it’s illegal to go to Sci-Hub and search for the DOI link of the article to get free access to it.)

Pick a point on the screen, and while looking at it, turn your head left to right. Your head will move, but your eyes will stay locked onto that point.

While at first glance that may seem tricky, in reality, the brain deals with it the same way as the smartphone: it just uses our internal accelerometer, the vestibular apparatus, pictured below in the red box. 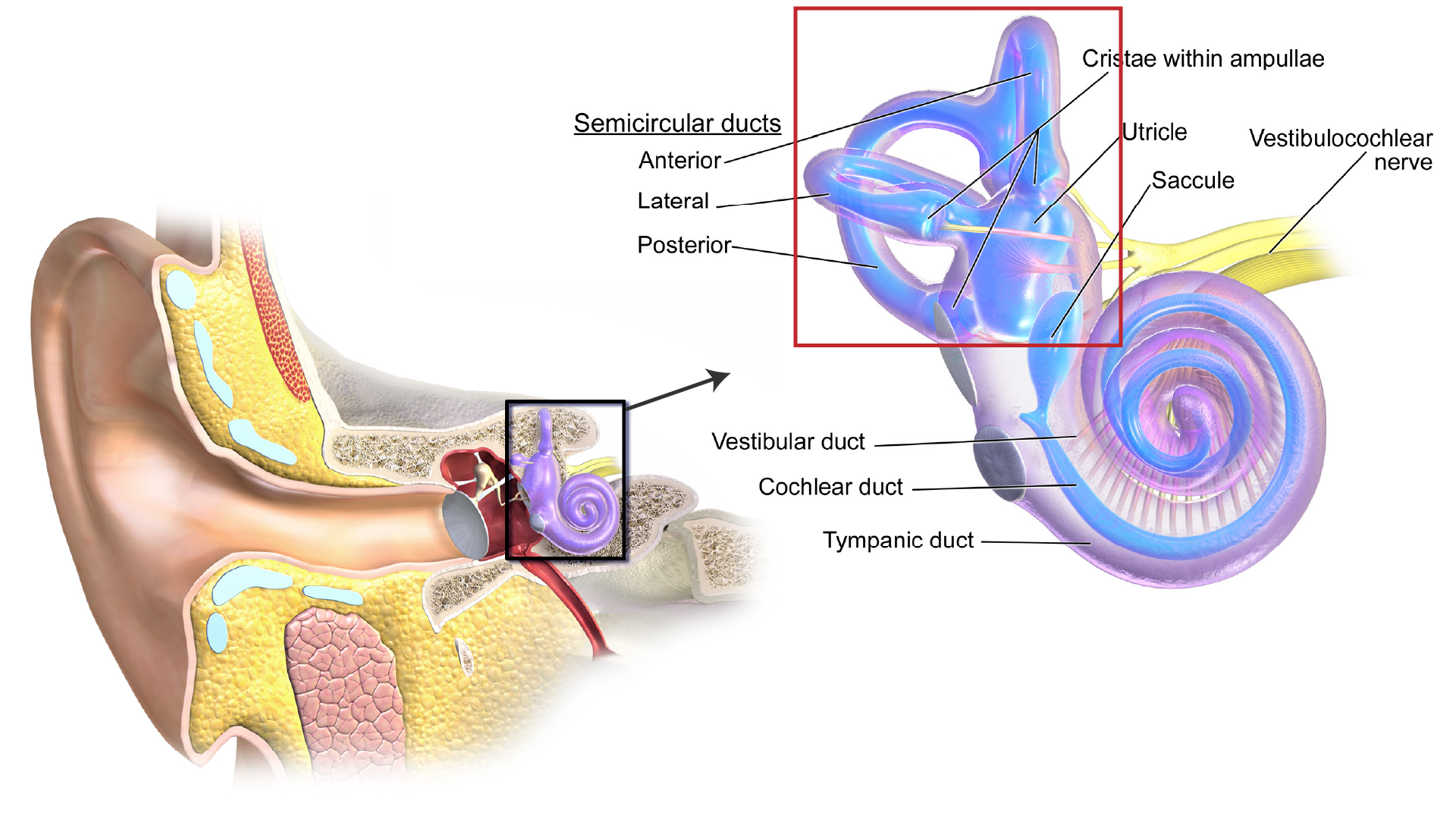 From accelerometer to muscles

From the vestibular organ, there’s a simple three-neuron-long connection that feeds the accelerometer signal to the muscles that move the eyes, first documented in the 1930s. We can follow it to see what it does. 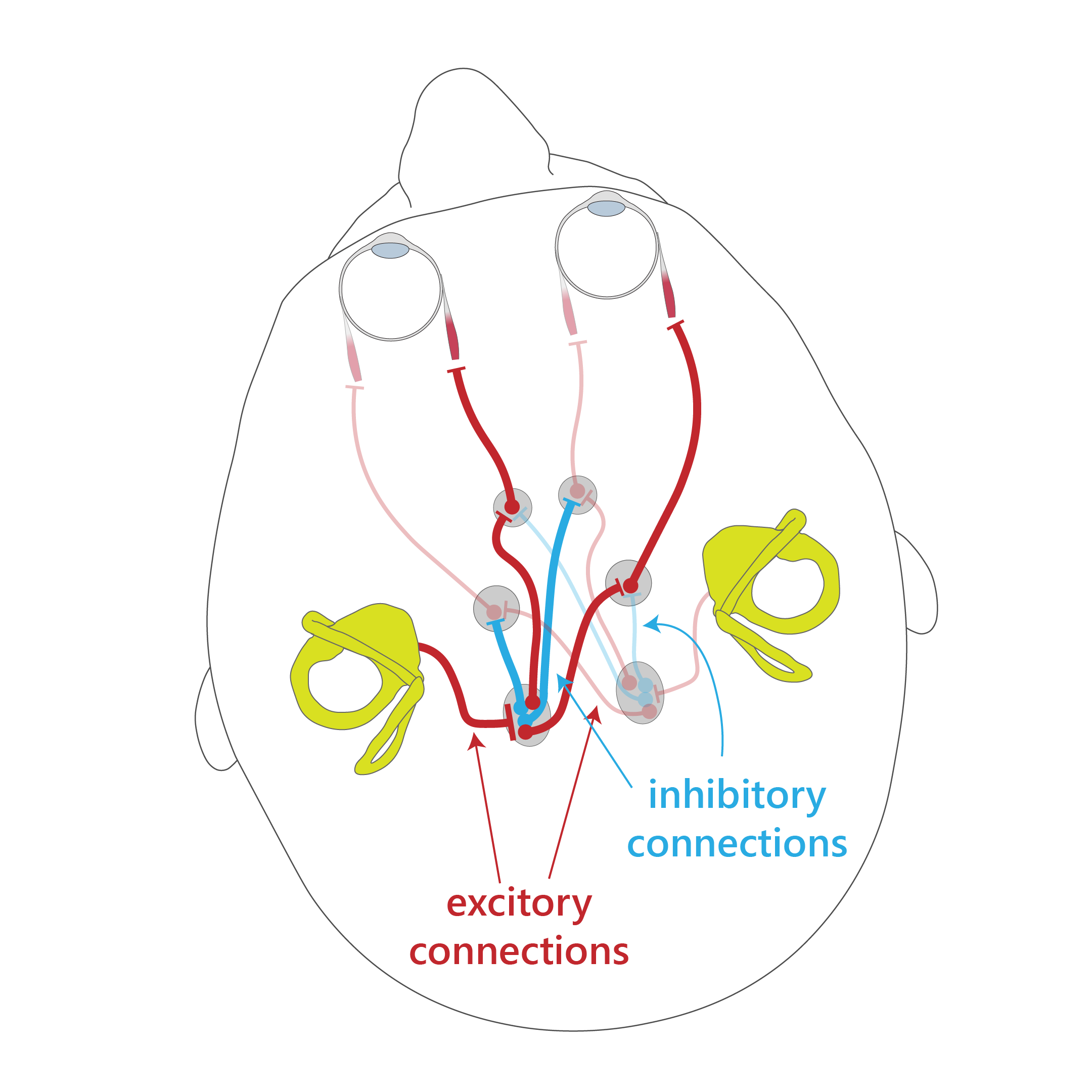 The signals from the vestibular neurons end up in the brainstem, the more basic part of the brain that sits between the cerebral cortex and the spine. There, another set of neurons directly connect them to the pools of motor neurons that move the eye muscles.

The muscle neurons, in turn, work according to rules we won’t go into right now, but it’s safe to simplify and say that the more excited they get the more the eye muscles contract.

So basically, when the head turns left, the increased rate of spikes from the left vestibular neuron is directly fed into the motorneurons that turn the eyes right.

End-to-end, this circuit is very fast. Experiments show that once the head starts turning, it takes less than 10 ms for the muscles to engage.

(Btw, Wikipedia has a different wiring diagram; I’ve seen it drawn both ways in papers. In practice, the result is the same either way.)

So, on the surface, it seems that we’re done. The acceleration output feeds directly into the motorneurons, the eyes move, and we’re happy.

But here’s the problem: when the head is done turning, the vestibular organs go back to signaling at the base rate. Then the tension in the eye muscles goes back to equal, pointing the eyes straight. That’s not what we were hoping to see.

To fix that, we need to add a neural integrator to the picture. 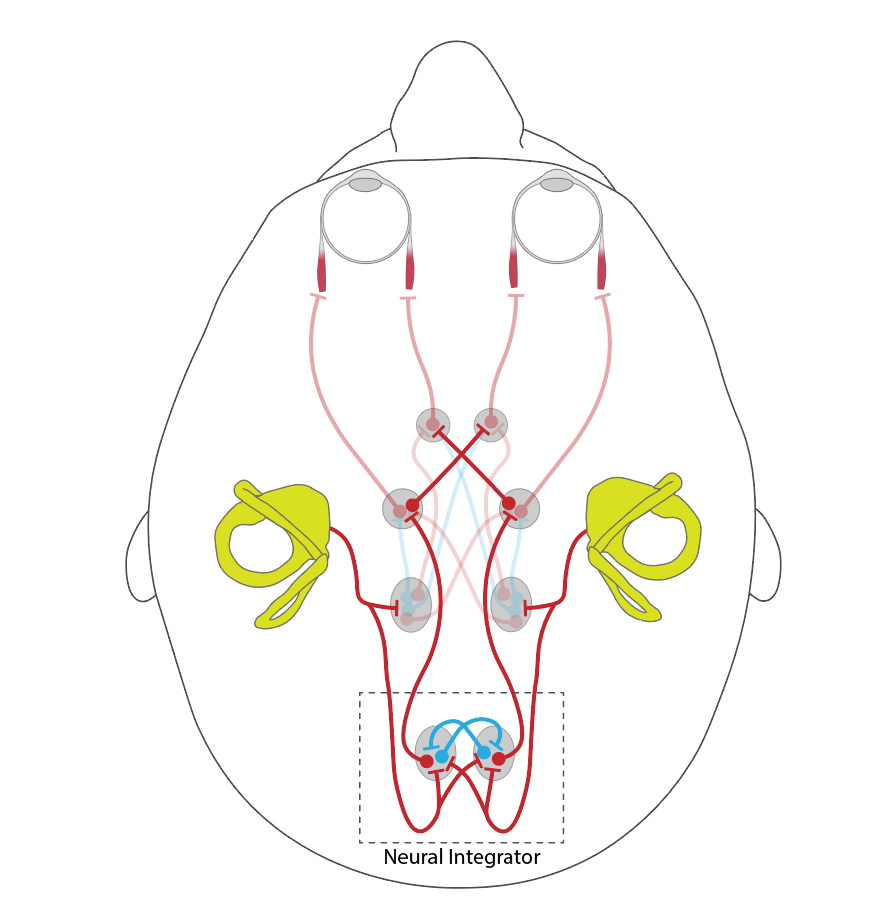 The neural integrator does this: (1) it collects the total velocity signal sent to the eye muscles, and (2) outputs the spikes at exactly the right rate to keep the eyes pointed in the right direction.

I.e. it literally integrates the angular velocity to come up with the final position. 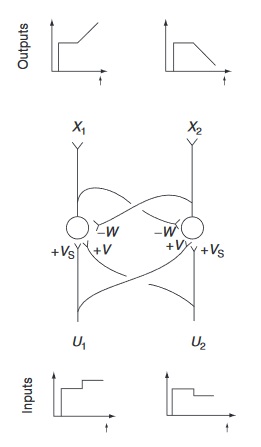 Some papers indicate that there may be a number of different neurons involved, and this may be a multi-stage process.

(On a tangent: there isn’t just one neural integrator. There seem to be a number of them in the brain; for example, if you close your eyes and move around the room, a part of the cerebral cortex will keep an estimate of your position from your motion, though it won’t be very accurate. One of the papers linked above even argues that accumulating the evidence for two alternatives in a decision process could also be considered an integrator.)

Turns out, there’s a circuit that runs through cerebellum that keeps the gain (ratio of head turn to eye turn) at exactly the right value. It’s a pretty clever circuit that turns out to be so useful that the brain has copy-pasted it thousands of times (with a few changes) and reused it in nearly all motor functions, plus a number of non-motor functions. 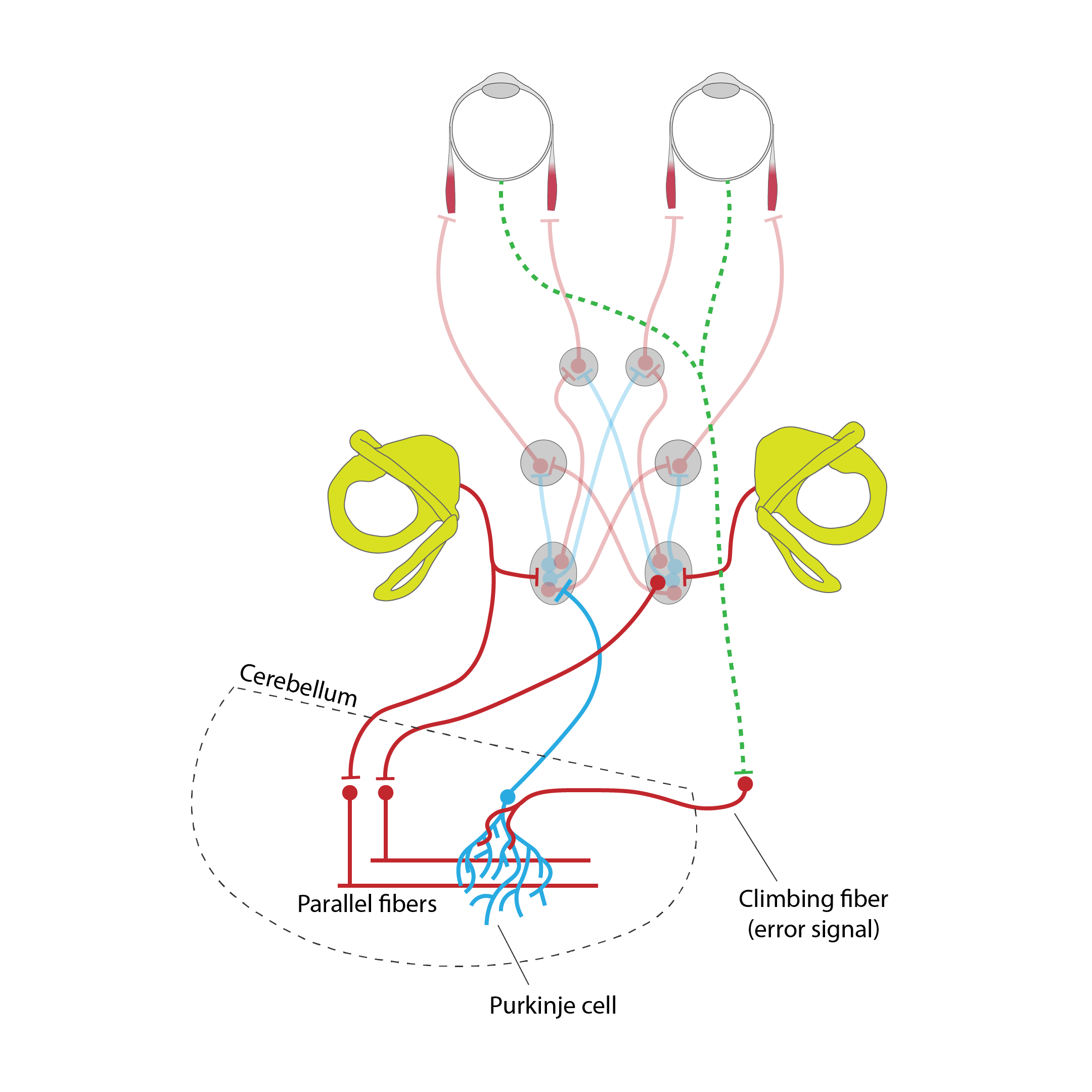 The center of this circuit are the inhibitory Purkinje cells, which, in this case, output a low, constant stream of spikes that lightly inhibit the connections from the vestibular neurons to the motorneurons.

The vestibular signal comes in through excitatory parallel fibers that make connections with Purkinje cells. When the head turns, these fibers make the Purkinje cell a bit more excited, making it inhibit the VOR circuit a bit more, kinda like tapping on the break.

Most of the time, this inhibition is just right to make the 5° head turn result in 5° eye turn. But what if it’s wrong?

This is where another set of neurons comes in - the climbing fibers. When the brain detects that the image on the retina lags behind motion (i.e. the inhibition is too strong), these fire. This sets the Purkinje cell ringing like a bell for a bit, and it turns off some of the connections from the parallel fibers, reducing the inhibition, and letting the eyes move faster.

I haven’t seen a good description for how the opposite error is fixed (eyes move too fast), but from what I remember from other circuits, the parallel-to-Purkinje connections gradually turn back on when the parallel fibers keep firing, so the error may just fix itself over time.

That’s basically all I know about the Vestibulo-Occular Reflex so far. As I mentioned, there are other mechanisms to keep the eyes steady, like the neck reflexes, or the slower and finer Opto-Kinetic Reflex that uses the information from the retina instead of the vestibular organ.