A few weeks ago, for various reasons I decided to start reading a neuroscience textbook (Fundamental Neuroscience). Though dense, it’s packed with interesting information that filled a lot of gaps in my knowledge about the brain.

One of those gaps was about how exactly the information travels through a neuron. Up to this point, all I knew was “something involving electric pulses”.

The reality, it turns out, is more interesting: neurons use ion channels to create and strengthen electric signals, and propagate information along their lengths.

So here is more or less how I understand this so far.

The setup - the neuron

First, a quick recap of the neuron structure. 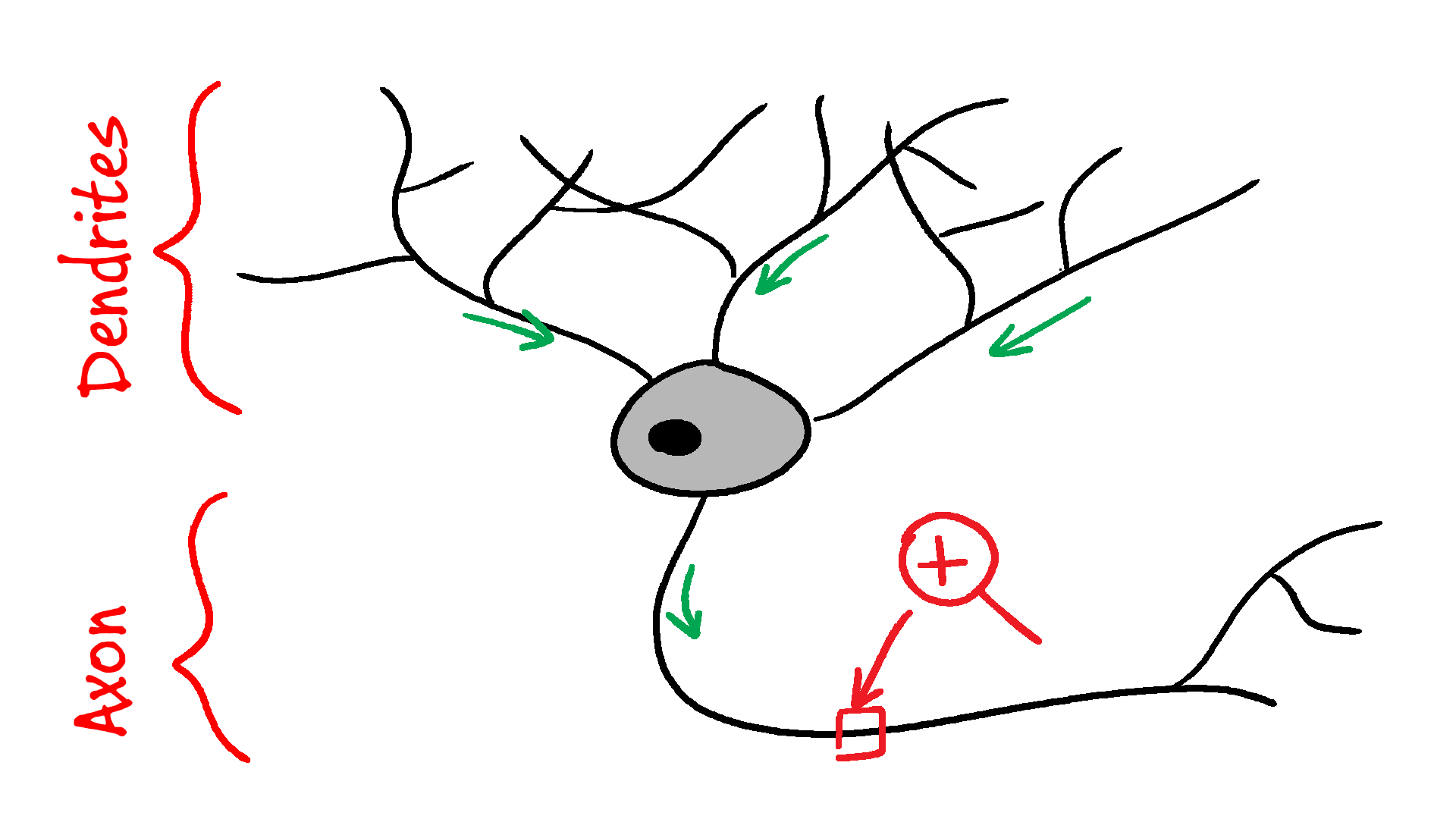 A neuron has the main cell body. From that body, it grows a large number of branched extensions called “dendrites”. These usually serve as the input “wires”, though they also do some signal processing.

Neuron usually also grows another long extension called an “axon”. This is normally the cell’s output, and it can be up to a meter long in humans, though in the brain it’s usually shorter.

Let’s zoom in to the axon. First, we’ll look at shorter axons, because longer ones have myelin sheath, which will complicate the picture.

The fluid inside the neuron (cytoplasm) and the intercellular fluid between the neurons have a number of ions dissolved in them: calcium (Ca²⁺), potassium (K⁺), sodium (Na⁺), chlorine (Cl⁻), and others.

For various reasons, neurons actively work to pump out Na⁺, Ca²⁺, and Cl⁻, so these are much more concentrated outside the cell than inside the cell. If the membrane wasn’t keeping them out, they’d quickly rush into the cell. Some still leak back in. 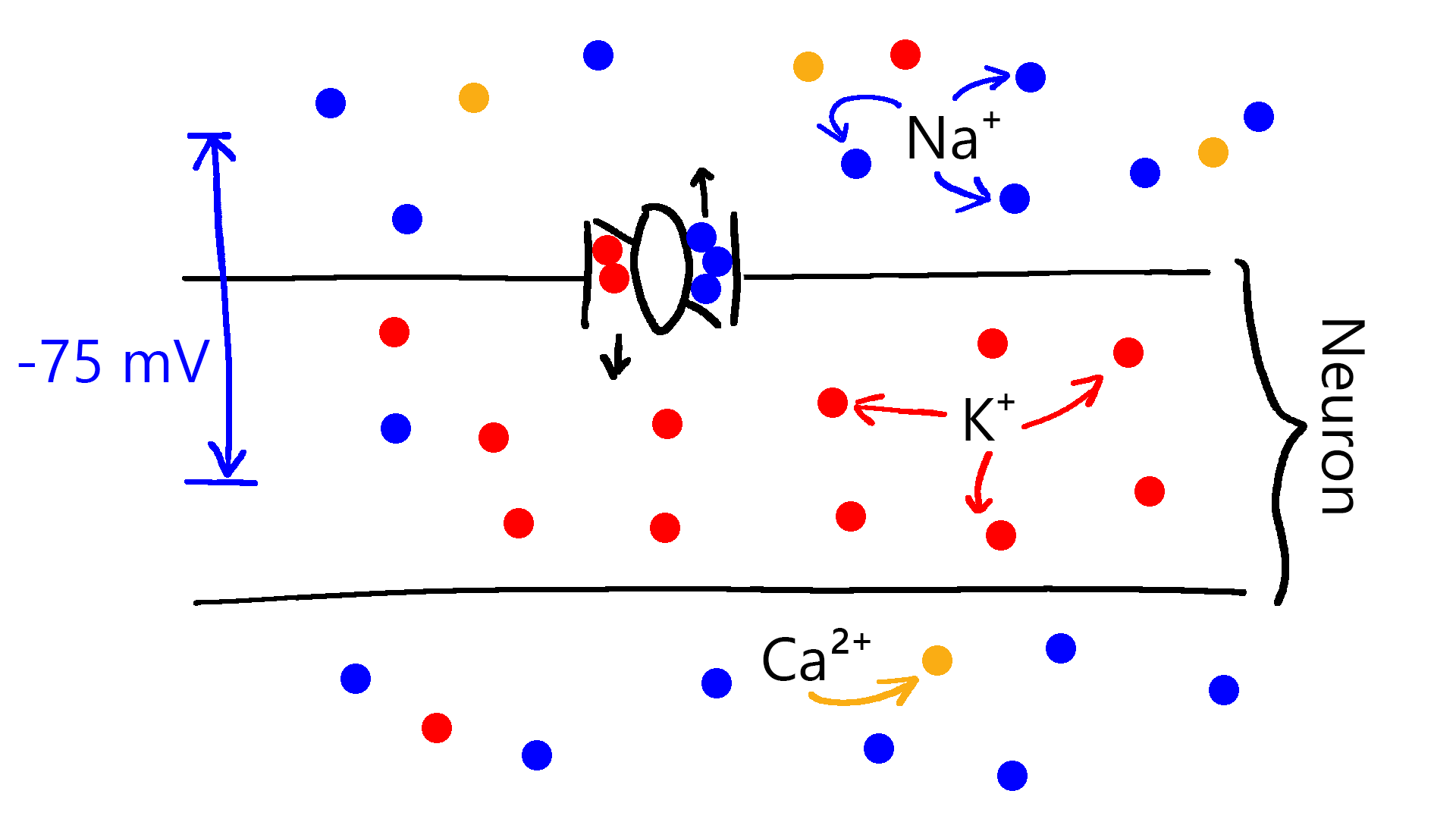 Each of the ions carries a charge, so the end result of this pumping is that the cell’s inside is negatively charged relative to the outside. This voltage difference is called the “membrane potential”. Resting membrane potential is typically between -75 and -40 mV (millivolts).

Ion channels are small valves set in the cell’s surface that let ions through if certain conditions are met. Some are opened by specific chemicals binding to them (e.g. neurotransmitters), while others open when the voltage inside the cell rises high enough. The latter are called “voltage-gated ion channels”, and they’re the ones we’re interested in.

Voltage-gated ion channels exist on all parts of a neuron, but are most concentrated in the axon. Most let through a specific ion: there are Na⁺ channels, K⁺ channels, Ca²⁺ channels, etc.

Let’s take a look at how Na⁺ channels and K⁺ channels would work to produce a voltage spike (called an “action potential”). 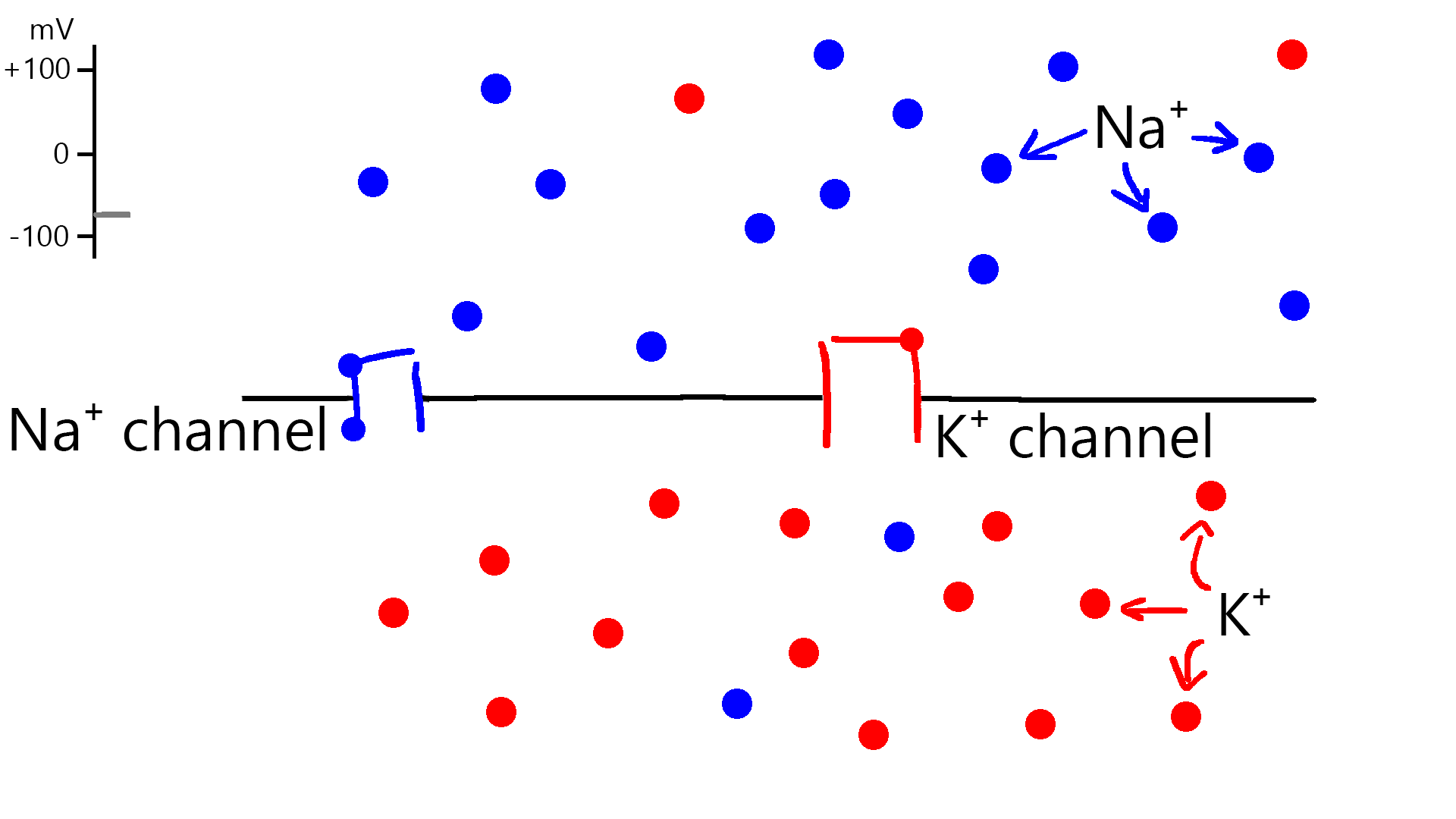 If something increases the cell membrane voltage to -55 mV, Na⁺ channels quickly open and let in a lot of Na⁺ ions. These ions carry a positive charge, so they quickly raise the voltage across the membrane to +30 mV. Then the channels automatically close. This happens over the span of milliseconds.

At the same time, K⁺ channels open and start letting out some K⁺ ions, opposing the Na⁺ current and slowing the voltage increase. The channels first open slowly, but after a while, the K⁺ current strengthens. 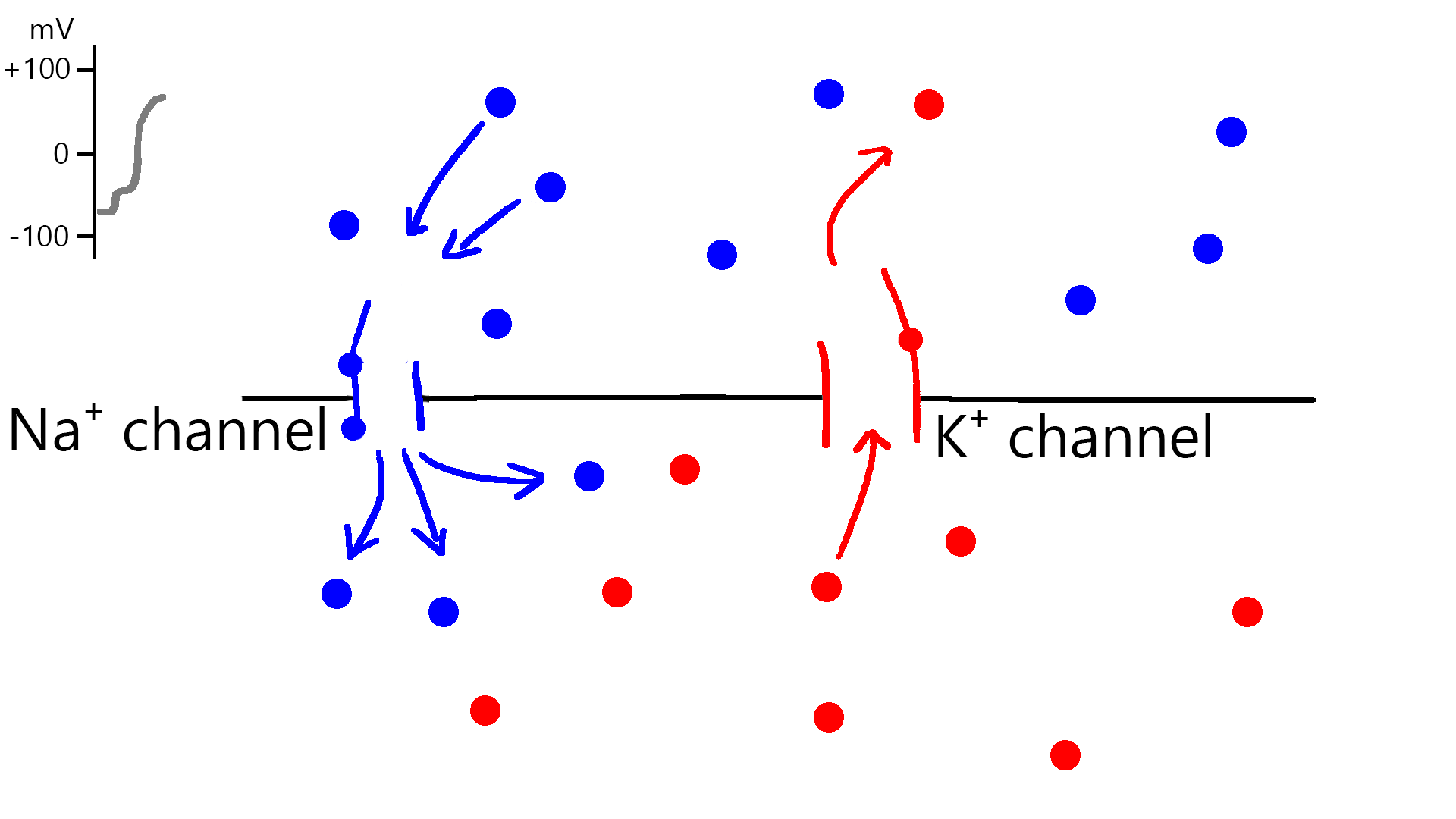 To start, Na+ channels dominate, but after they close, K⁺ outflow quickly makes the membrane voltage drop. This drop overshoots the initial resting level before leveling off at the voltage where K⁺ concentrations stay stable. 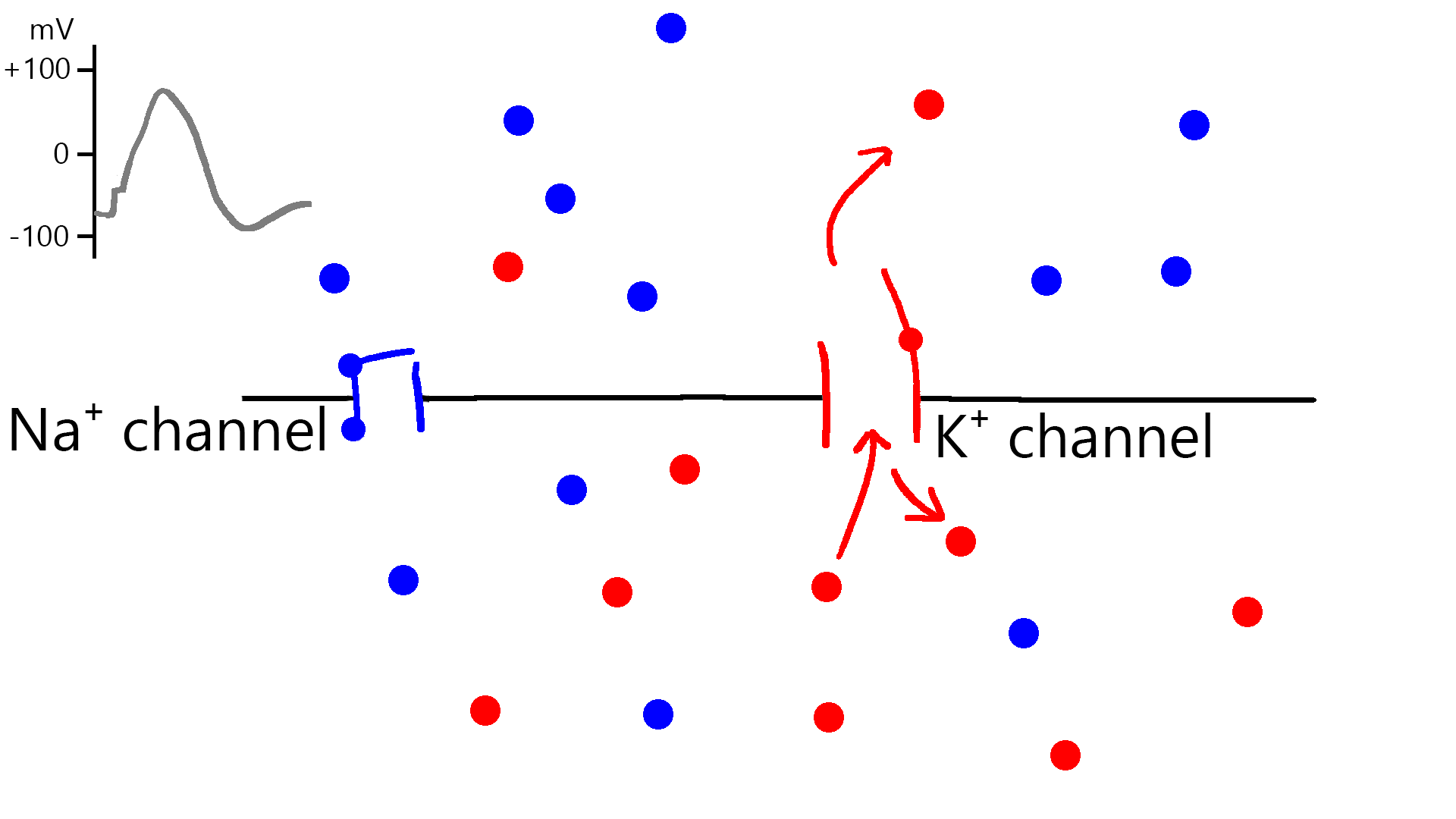 The total number of ions exchanged throughout the whole process is minuscule, and has little impact on the overall concentration of ions inside or outside the cell.

The ion channels usually take time to reset before the next firing, so a single voltage spike doesn’t usually set off the entire neuron ringing indefinitely. However, the voltage can propagate from the base of the axon back into the dendrites, where it can play an important role in influencing whether the next incoming signal will set off the ion channels there.

Neurons are somewhat conductive, but not very conductive - they’re not copper wires. They’re also leaky - a large portion of their current seeps out into the surrounding intercellular fluid, partly because the cell membrane is not 100% impermeable to ions, and partly because of the membrane capacitance.

That means that if a given ion channel generates some voltage locally, that voltage will quickly drop off as we move farther from that channel.

So the ion channels cannot be spaced too far apart, and the signal will travel only as fast as the channels can open and close between the start and the end of the axon.

Myelin speeds up the signal

Vertebrates (including humans) have a clever innovation to speed up the propagation of signals: they use myelin sheaths to insulate axons that travel over distances longer than millimeters.

Myelin sheaths form in 0.2- 1 mm segments over the neurons and are made from layers of cell membrane and protein made by the dedicated cells - oligodendrocytes in the brain and spinal cord, and by Schwann cells everywhere else.

Myelin significantly thickens the axon’s wall and reduces the amount of current leaked out through the cell membrane. This allows the myelinated neuron to space their ion channels farther apart, significantly speeding up the propagation of the voltage spikes. 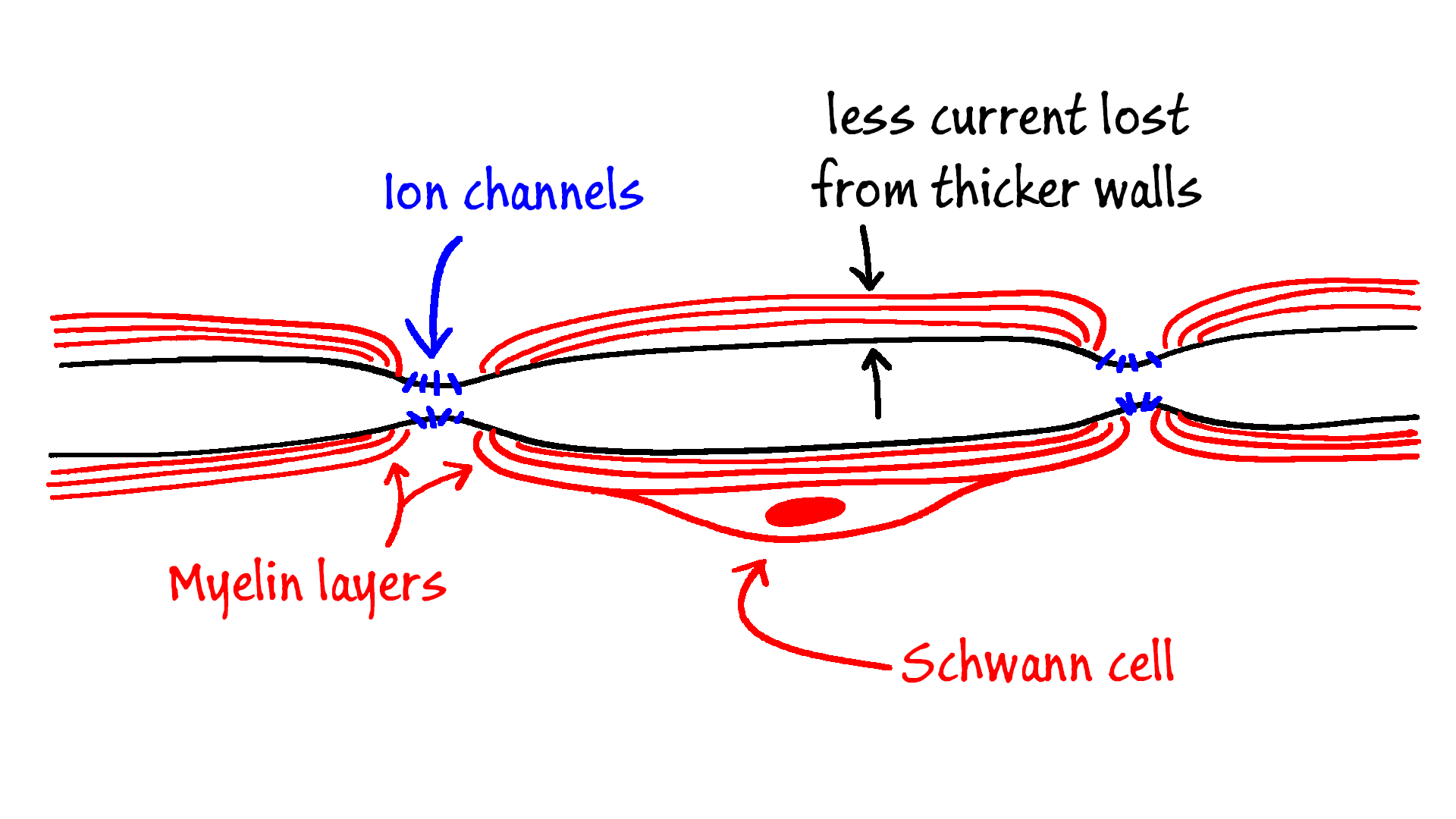