Suppose you want to collect some signals from neurons in the brain. What kind of wire should you stick into the brain to do that? Could it be just any wire, or do you need some special brain-grade wire?

That’s something that I’ve been curious about for a while now, so I’ve read a bunch of papers on the subject.

Surprisingly, off-the-shelf 44 AWG insulated copper wire is not a completely terrible choice. Its 51μm diameter (plus insulation) is a bit on the high end for a typical intracortical electrode, but it’s about the right order of magnitude. If you stick it in, for a short time it has a decent chance of picking up electric spikes that nearby neurons send when they get excited. 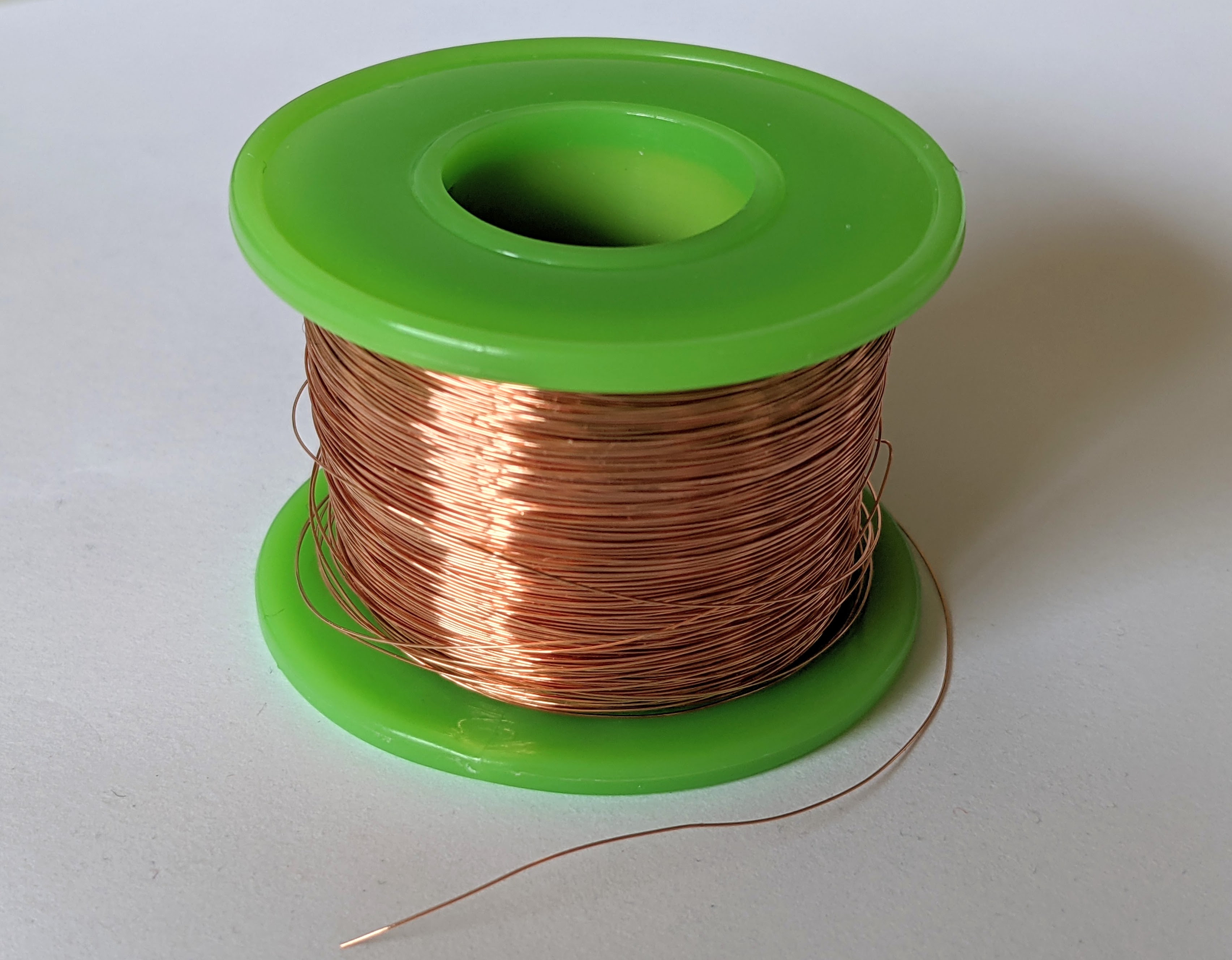 But it’s still a terrible choice. First, the copper will quickly oxidize and corrode in the brain’s electrolyte-rich fluid. And second, copper is toxic to the neural tissue. So don’t put copper electrodes into anyone you love.

Okay, let’s try something else. How about an off-the-shelf stainless steel 40μm wire? These are actually a legit choice, once you figure out how to insulate and sharpen them. In 1958, at UCLA, Felix Strumwasser sharpened 80μm stainless steel wires with hydrochloric acid and used them to record spikes in neurons of ground squirrels for over a week. The wires were likely insulated by dipping them into lacquer, as described by Green, also from UCLA, later the same year.

However, the most popular electrode metal these days seems to be tungsten or platinum. Though noticeably pricier, it seems that these give you a better signal-to-noise ratio without messing with the brain chemistry.

So let’s say we get some platinum or wire, coat it with tissue-friendly parylene C for insulation, and then expose and sharpen its tip. Are we good?

According to Techniques for Large-Scale Multiunit Recording, inserting one electrode by itself is often not that useful. First, in addition to neural signals, the electrode will also pick up the background noise, including the AC power lines in the walls. Second, we often want to collect spikes from multiple sites to observe the behavior of more neurons. 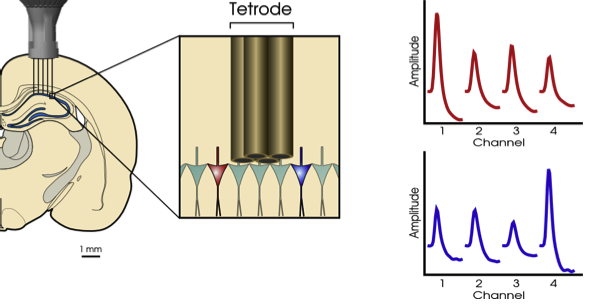 The next step up is electrode arrays, which help measure signals over larger areas or a range of depths. Here, silicon probes became popular, like the widely used Utah array with as many as 100 needle-like electrodes, or a Neuropixels probe, which has a single shank with 960 electrodes. 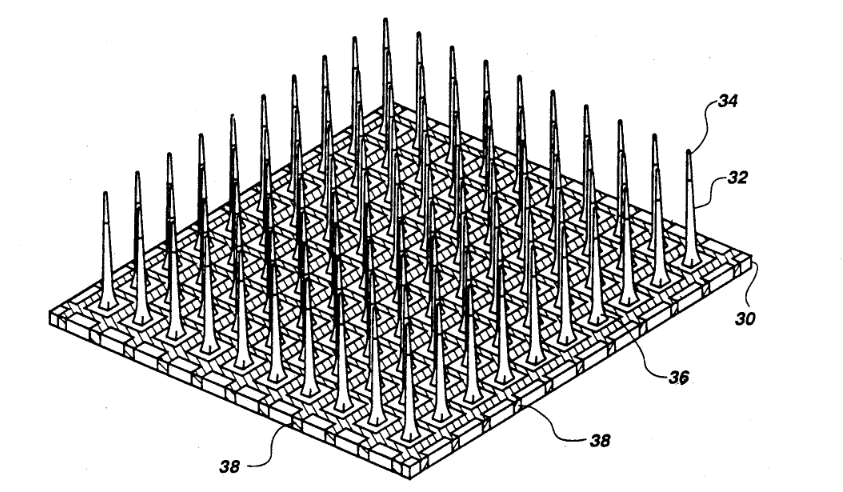 Utah array in particular featured in a number of really cool experiments, like this BrainGate experiment where researchers implanted Utah arrays into a tetraplegic individual and connected them to electrodes implanted in the hand muscles, allowing the subject to move his hands.

However, it turns out that silicon probes have their own problems, and aren’t the best thing to insert into the brain either.

So what’s the problem with the silicon probes?

Well, a number of studies have shown that over the months after the implantation, the signal from the electrodes weakens, and some of the previously working electrodes go silent.

And metal electrodes aren’t better either. For example, this study tracked the performance of 50μm tungsten electrodes over 9 months, and found that within the first few months, many electrodes could no longer detect spikes and the few that could, had much weaker or unstable signals. In some individual rats (who got the arrays implanted), by the end of the experiment, zero out of sixteen electrodes could detect useful signals

To be clear, all of these studies showed that in almost all cases it was still possible to get useful signals at the end of the experiment, just that over time the signal quality got noticeably worse.

So can we do better?

A lot of studies have dug into why the signal quality decreases. This recent review (section 2) summarizes the causes: (1) the electrodes create small stab wounds on the way in, damaging the tissue and the blood vessels; (2) electrode bodies cause chronic inflammation that results in a scar that surrounds the probe and reduces the signal quality; (3) all of the above cause nearby neurons to die or migrate away from the insertion site.

This can be made worse by the rigid bodies of the probes. Mammalian brains naturally move inside the skull, swelling with each pulse of blood from the heart, and rigid metal and silicon electrodes cannot deform at the same rate as the brain tissue.

To top it off, poorly chosen insulation can crack or detach from the probe, letting carefully collected signals leak back into the surrounding tissue. 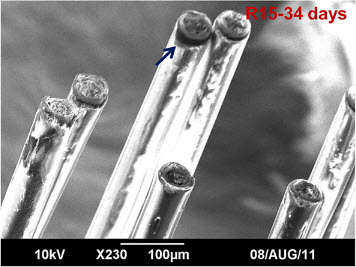 Various recent reviews, such as this one and this one, suggest that the best electrodes would be:

Over the last decade, a number of electrodes satisfying these conditions started appearing:

Most of these came with a study showing how much they outperform the previous generation of electrodes, and how little damage they do in a rat brain. In the case of something like NeuroRoots, it looks pretty impressive on paper: after 7 weeks, all 32 of the 32 implanted electrodes could pick up signals nearly as well as on the day they were implanted. In the case of the conducting polymer above, the study compared it to much thicker tungsten electrodes, making the comparison somewhat unfair.

So basically, yes, you would need a brain-grade wire to collect signals from neurons, and we’re still working out the specifics of what makes the wire “brain-grade”.

With the progress above made in the 2010s, I’m looking forward to seeing what the 2020s will bring.